The Isle of Pingo Pongo

A cruise ship's trip from New York starts departing to the island of Pingo-Pongo, presumably located in the South Seas. The ship sails past the Statue of Liberty, who acts as a traffic cop, past the "Canary Islands" and "Sandwich Islands," to the remote island. The inhabitants are mostly tall, black, and have big feet and lips. They at first play drums, then break into a jazz beat, still described as a "primitive savage rhythm."

Production cel with a production background from "Daffy Duck & Egghead" 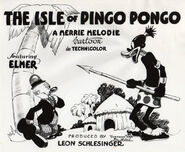 Lobby card
Add a photo to this gallery

Retrieved from "https://looneytunes.fandom.com/wiki/The_Isle_of_Pingo_Pongo?oldid=258723"
Community content is available under CC-BY-SA unless otherwise noted.