As the Burbank to Vegas Desert Rally commences Yosemite Sam and Tasmanian Devil cause Sylvester and Porky Pig to lose control of their vehicle and crash into the Warner Bros. entrance. Bugs Bunny and Daffy Duck are in last place as their car broke down. The three teams continue to drive to win the Golden Anvil. 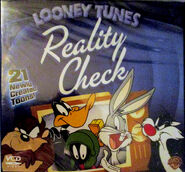