The Mice Will Play is a 1938 Merrie Melodies short directed by Tex Avery.

Inside Dr. I.M. Nutts' building, is a small mouse hole at the side. The mice slowly open the hole and take a peek, and upon seeing nobody around they slowly creep from the hole and sneak around the room until they decide to test their luck by shouting, then hurriedly run back into just made mouse holes. When they get no response everyone comes out to play and have some fun. They play with the medical equipment located around the room, such as looking at bacteria slides through a microscope, playing with a stethoscope and finding out the results of taking heart pills, and various other things.

Unknown to the mice, however, a very hungry cat has been spying on them. They also do not hear the poor cries of a girl mouse on the other side of a nearby door and continue playing as the cat creeps into the room.

The mice continue to play, with one mouse checking out an eye chart while another looks through an X-ray machine. Eventually, the mice sneak up on the lead mouse of the group, preparing to prick him with a big needle right in the butt as he is distracted, but an audience member stops them. Annoyed the mice toss the injection aside while grumbling and storm off.

The cat meanwhile is preparing to eat the girl mouse inside the cage. She quickly writes a letter to the others in hopes of them finding her. She throws it through the opened window of the door and right to the main mouse, who sees it and impulsively rushes into the room to save her. With ease, he manages to free her from the cage and when she attempts to embrace and kiss him, he forces her off as she thanks him for help. Unknown to the both of them, the cat is sneaking back up.

As they make their way to be with the other mice, Susie tries to tell the main mouse, Johnny, how she feels but he only thinks she is being weird and asks her what her problem is. But when Susie manages to reveal her feelings to him, he happily reciprocates and the two mice decide to wed. The cat continues to sneak up on all of the mice as the two of them share a kiss and Susie goes on to reveal her plans to have a lot of little baby mice. The cat overhears this and he decides he will wait, rather than eat them now. 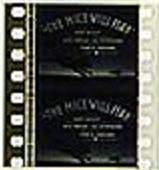 Lobby Card
Add a photo to this gallery
Retrieved from "https://looneytunes.fandom.com/wiki/The_Mice_Will_Play?oldid=208601"
Community content is available under CC-BY-SA unless otherwise noted.