The Mouse-Merized Cat is a 1946 Merrie Melodies short directed by Robert McKimson.

Babbit hypnotizes Catstello who refuses but fails and finds himself acting like Bing Crosby, Frank Sinatra, Rochester, and then a chicken, and a dog. Babbit hypnotizes him back, but Castello decides to hypnotize both of them into a cowboy and a horse, so he can enjoy their house in peace. 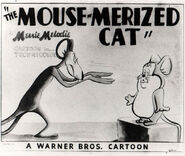 Bob Mckimson with Warren Foster and Eddie Selzer (seated) during the production c. 1945