The Night Watchman is a 1938 Merrie Melodies short directed by Chuck Jones.

The watchman gets sick, so his son Tommy Cat is enlisted to watch the kitchen. When the gangland-style mice find out that he's the one on duty, they try to take over.

On the now-defunct WB channel, the sequence near the end of the short where Tommy Cat punches the mice was shortened.[1] 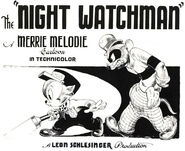 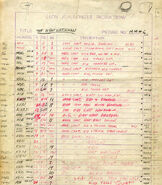 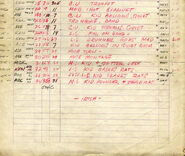 Comparision of the "original" Blue Ribbon reissue titles and the recreated ones.

Animation breakdown of the cartoon

Retrieved from "https://looneytunes.fandom.com/wiki/The_Night_Watchman?oldid=224691"
Community content is available under CC-BY-SA unless otherwise noted.