The Night of the Living Duck

The Night of the Living Duck

The Night of the Living Duck is a 1988 Merrie Melodies short directed by Greg Ford and Terry Lennon.

Daffy Duck is reading a scary comic book called Hideous Tales (issue #176). The story ends in a cliffhanger, and Daffy rifles his bookcase looking for the next issue. "It's a veritable collector's item!" A Smogzilla clock falls, and beans Daffy, making him think he's the featured act in a nightclub. All the customers at the nightclub are classic movie monsters. Fortunately, there was a bottle of "Eau de Tormé" in Daffy's dressing room, which makes him sing like Mel Tormé. He sings "Monsters Lead Such Interesting Lives" to the room, and they love it. Then he goes around the room, greeting the patrons, but his good-natured ribbing of "Smogzilla" doesn't go over well with the giant lizard, who eats Daffy. Daffy wakes up, to find himself stuck in a wastebasket, along with the comic he was looking for (Hideous Tales issue #177), with "Smogzilla" on the cover. Daffy scoffs, and the Smogzilla on the cover comes to life, saying, "You were expecting maybe Calvin Coolidge?" 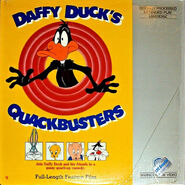 The Night of the Living Duck (1988) - 2021 restoration - Intro and Outro + 45-seconds clip
Community content is available under CC-BY-SA unless otherwise noted.
Advertisement