The Penguin Parade is a 1938 Merrie Melodies short directed by Tex Avery.

Penguins from all over gather at the grand opening of their new nightclub, The Club Iceberg. A penguin version of Bing Crosby appears, and the cartoon ends with an 1930s jazz band. 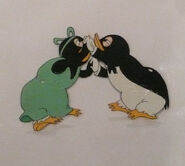 Retrieved from "https://looneytunes.fandom.com/wiki/The_Penguin_Parade?oldid=237395"
Community content is available under CC-BY-SA unless otherwise noted.