The Pest That Came to Dinner

The Pest That Came to Dinner

The Pest That Came to Dinner is a 1948 Looney Tunes short directed by Arthur Davis.

Porky's house is under attack by Pierre, the biggest and hungriest termite in the world, and nothing Porky can do will save his house. When he can't exterminate the termite himself, he goes to a shyster called I.M.A. Sureshot from Sureshot Exterminating Co. who offers him a series of unsuccessful methods to remove the termite, such as firing an insecticide squirt gun on the termite, using a vacuum cleaner to suck up the termite, flooding up the baseboards where the termite lives with a water hose, and using a TNT stick. Porky eventually gets fed-up with the constant failures in getting rid of Pierre, and teams up with Pierre to eat up all the furniture in Sureshot Exterminating Co. 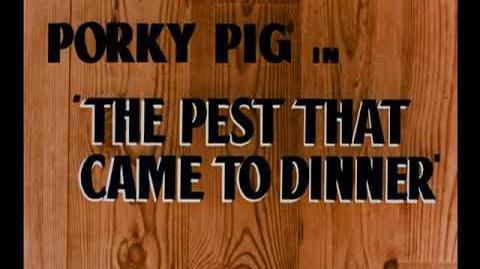