The Prize Pest is a 1951 Looney Tunes short directed by Robert McKimson.

Porky Pig is listening to the radio. Somebody just won $10,000 on a game show. Porky changes channels and hears a radio voice telling him that he may be the winner of the grand prize. The grand prize is delivered to Porky's door. To Porky's surprise, the prize is Daffy Duck. Daffy wastes no time in doing his usual antics, but Porky just can't put up with him. So Porky throws Daffy out. Daffy then tries to scare Porky each time Porky mistreats him. He uses fake vampire teeth and messes up his hair to do the trick. Eventually Porky finds out, and pays him back by scaring Daffy. He puts on a Halloween costume and scares Daffy out of the house. Then Porky accidentally scares himself. 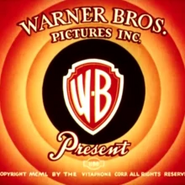