The Scarlet Pumpernickel is a 1950 Looney Tunes short directed by Chuck Jones.

Although the title (invoking a type of bread instead of a flower) is a pun on The Scarlet Pimpernel, the Pumpernickel is given a portrayal closer to that of Robin Hood: after Daffy fails to perform a stunt, he mutters that "I'll have to check with Errol," and a costumed appearance more like Zorro, with cape, mask and sword, none of which the Pimpernel used. His alter ego the "Nobleman disguise" is, however, more in line with wealthy English fop Sir Percy Blakeney of the Pimpernel fame.

In a story-within-a-story, Daffy Duck is fed up with being overly type-cast for comedy and wants to try some more serious roles. He offers a script to the Warner Bros. executive "J.L.", called The Scarlet Pumpernickel, which he wrote himself (under the name "Daffy Dumas Duck." Daffy reads various scenes of the script to J.L. Each time, Daffy announces another page number.

In this script, the clumsy Scarlet Pumpernickel (Daffy) must save the Fair Lady Melissa from being married to a man she does not love, the Grand Duke (Sylvester) under the Lord High Chamberlain's (Porky Pig) orders. Melissa loves Scarlet, but her happy mood is extinguished in a heartbeat when the Chamberlain orders her to "keep away from that masked stinker". The Chamberlain gets a brilliant plan and decides to marry Melissa to the Grand Duke in exchange for killing the Scarlet Pumpernickel. Toward the end, the Grand Duke and the Scarlet Pumpernickel engage in an intense duel, but no conclusive ending is given as to who ultimately wins the battle. Daffy, as the scriptwriter, overdoes the ending as an unlikely series of random and accelerating natural disasters, including skyrocketing food prices (most notably "kreplach").

And when J.L. asks Daffy "Is that all?", a pressured Daffy then decides to end the story with the Scarlet Pumpernickel committing suicide by blowing his brains out (he even demonstrates so with a pistol, but merely misses as it just goes through his cap). After that, Daffy comments "It's getting so you have to kill yourself to sell a story around here!" before passing out.

The ending of the cartoon after Daffy pitches the scene in which the price of food skyrockets (where Daffy acts out the suicide of The Scarlet Pumpernickel) is almost always edited on television, but in different ways: 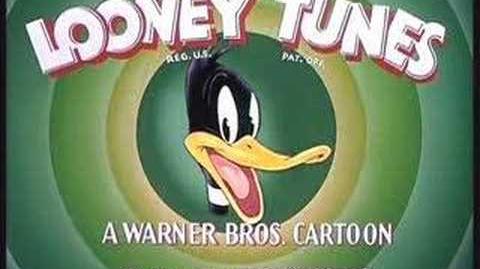 Original Opening 2
Add a photo to this gallery

Retrieved from "https://looneytunes.fandom.com/wiki/The_Scarlet_Pumpernickel?oldid=188021"
Community content is available under CC-BY-SA unless otherwise noted.