The Slap-Hoppy Mouse is a 1956 Merrie Melodies short directed by Robert McKimson.

Sylvester takes his son Junior on a mouse-hunting expedition in an old, broken-down, mouse-infested house near some railroad tracks. Baby kangaroo Hippety Hopper falls out of a passing train and turns up in the house. Sylvester and Junior mistake him for a giant mouse, and Sylvester is obliged to fight the playful Hippety. 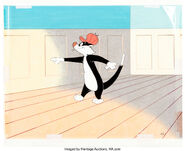