The Squawkin' Hawk is a 1942 Merrie Melodies short directed by Chuck Jones.

Tired of eating worms, Henery Hawk wants chicken for dinner, but his mother stops him at every turn with a worm, who doesn't want to get eaten. This results in him getting grounded, going to bed with no dinner at all.

Later at night, Henery, who couldn't sleep because of his hunger, sneaks out to the chicken coop. His first victim is a hen named "Hazel". As tiny Henery struggles to carry Hazel, it alerts her husband, who at first thinks Hazel is intoxicated or had her legs shrunk in size, only to find out that Henery has captured her, panicking Hazel at once.

Henery continues feuding with the rooster and the hen, until his mother catches him from outside the chicken coop.

Back at home, Henery is again told to eat a worm, since "mama knows best." Henery, having not learnt his lesson, and feeling sorry for the worm, still wants to eat chicken, causing the worm to give him a big kiss on the beak.

"Does it strike you that my wife is acting a little strangely tonight?"

"Hazel, have you've been drinking?"

"Back to your nest where you belong. You're making a complete fool of yourself."

"Hazel, what on Earth happened to your legs?"

"Oh, ho. What is this? A rather small chicken hawk."

"Is this man bothering you, Hazel?" 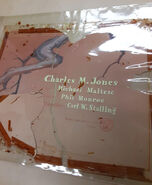