The Super Snooper is a 1952 Looney Tunes short directed by Robert McKimson.

Daffy Duck is Duck Drake, a "Private Eye, Ear, Nose, and Throat". He receives a call that summons him to the J. Cleaver Axe-Handle Estate, where somebody supposedly has been murdered. He arrives at the house and suspects a lady duck of committing the crime. The lady duck shows him affection, however Daffy forces her to reenact the murder. Along the way Daffy is shot, crushed by a falling piano, and eventually run right over by a train. The lady duck then tells him that he is at the wrong address and that the real murder site is down the road, but not before showering him with love by chasing him through the house and out the door. 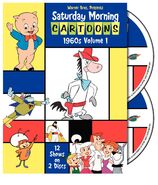