The Unmentionables is a 1963 Merrie Melodies short directed by Friz Freleng.

A pair of eyes look through a peep door, followed by the credits. The Roaring 20s were a time of jazz, new fashion trends, such as oversized fur coats on men and short-skirted dresses, bell hats, knee socks, and long pearl necklaces on women, dance parties, and mobster violence. A pair of gangster cars shoot guns at each other, ceasing at a traffic light. One man, witnessing the gangster battles, hurries over to the nearest telephone booth and orders the operator to connect him to the police, but the dimwitted female operator takes so long to make the connection, that the gangsters' gunfire shoots the telephone booth and man in half, to which the operator says, "Sorry! You've been disconnected."

Over in Washington D.C., Bugs Bunny, addressed as Agent Elegant Mess, is assigned by his chief to infiltrate the gangster underworld in Chicago. As Bugs takes a taxi out to Chicago, he discovers he's fallen into a trap set by Rocky and Mugsy.

At the hideout, Rocky and Mugsy have tied up Bugs and put his feet in a bucket of water, making it seem like he has a cold, but Mugsy pours in some cement. Both men then throw Bugs into Lake Michigan in the dark of the night, but unknown to the men Bugs manages to use a pipe as a snorkel and hop out of the lake.

The next night, the gangsters decide to throw a party to celebrate Rocky's birthday and the supposed death of Bugs. Rocky's guests include Jack "Legs" Rhinestone, wearing ladies' socks on his legs, "Baby Face Half" Nelson, whose face is the size of his cigar end, "Pizza Puss" Lasagna, whose face looks like the surface of a pizza, "Pistol Nose" Pringle, whose nose is shaped like a pistol and breathes out cigarette smoke, and "Teeth" Malloy, whose giant teeth take up all of his face.

Mugsy announces Rocky's entertainment just as Bugs pops out of the cake, disguised as a flapper. During the entertainment, Mugsy, distracted by Bugs' disguise, nudges Rocky so he falls over, making Rocky punch him up the jaw. Just as Rocky comes up to Bugs to tell him he loves him, Bugs kicks Rocky up the jaw for three times, making him drop his guns. The third kick has Rocky so deep under his hat that he has to feel the floor for his guns and fire aimlessly.

Once Bugs flees, Rocky sees he's been set up and orders all the gangsters in attendance to capture Bugs, but they fall to the floor dead, Rocky having shot them by accident. Just as Mugsy comments on Rocky making a boo-boo, Bugs comes in, disguised as a police inspector, and books Rocky for murder. Determined not to be booked, Rocky whips out a revolver. Bugs whips out a carrot, which Rocky and Mugsy find funny, until the carrot end opens up and blasts them. When Bugs tries again, the carrot is empty, and Bugs comments, "That's the trouble with carrots! They're only good once!"

Rocky and Mugsy chase Bugs up a set of stairs into a storeroom. Mugsy slams the door on Rocky, which prompts him to sock him up the jaw again. Bugs escapes, locks the door, and runs down the stairs. A light comes on, revealing that the three characters are in the ACME Cereal Factory. Bugs throws a switch, which sends Rocky and Mugsy into a mixer and has them mixed about like "a merry go round at the amusement park." Bugs throws another switch which puts them in the popper. When the cereals come out on the conveyor belts, Rocky has been placed into a "six pack" box and Mugsy has been placed into a "king sized" box, both boxes showing their pictures with "cut along dotted lines" on them.

The next day, with Rocky and Mugsy apprehended, Bugs takes them to the State Prison. Rocky and Mugsy are sentenced by the court to spend twenty years of hard labor. As they're hammering away on the rocks, Bugs joins them in the sentence, as he had lost the keys to the handcuffs. 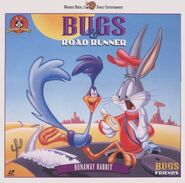 Mugsy: Uh, Rocky, we'd like to present you a token of our esteem.

(Bugs Bunny pops out of cake, disguised as a flapper)

(Rocky picks up guns and fires. Bugs flees out of his disguise. Rocky ceases firing)

Mugsy: Gee, Rocky, you made a boo-boo.

Bugs: (disguised as a police inspector) Yeah, and I'm bookin' ya for moider.

Bugs: (whips out carrot) Stick 'em up, you're under arrest!

Bugs: Dat's the trouble with carrots: Dey're only good once.

(Rocky fires revolver, causing Bugs to flee and begin the chase through the ACME Cereal Factory)