The Wacky Worm is a 1941 Merrie Melodies short directed by Friz Freleng.

In a series of futile attempts to catch a wacky worm in an orchard and junkyard, a frustrated crow hits on the idea to eat into a group of apples where the worm is hiding. After devouring all but one, which the green-faced crow is victoriously about to eat, a pesky woodpecker knocks a bunch more off a tree. The crow, now no longer hungry, looks at the movie audience and says, "Oh well, who wants a worm anyhow," then keels over and faints. 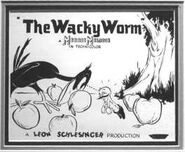 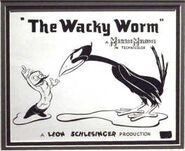 Retrieved from "https://looneytunes.fandom.com/wiki/The_Wacky_Worm?oldid=204227"
Community content is available under CC-BY-SA unless otherwise noted.