The Windblown Hare is a 1949 Looney Tunes short directed by Robert McKimson.

The three pigs read the story of themselves. When they became aware of the big bad wolf coming to blow down their house, they decided to sell their straw and stick houses to a sap-sucker (which would turn out to be Bugs Bunny) and the wolf would go after him.

Next Bugs arrived and saw signs signifying that the straw house is for sale. So he bought it for $10. Then the wolf arrived (while reading the same story the pigs were reading) and (of course) blew the house down. The same events happened at the stick house. Fed up with the wolf blowing his houses down, Bugs decided to get revenge on the wolf by saying "Of course, you know this means war!"

Bugs dressed himself up Little Red Riding Hood and skipped off to grandma's house with a basket of goodies and singing "The Rabbit in Red" (a parody of "The Lady in Red"). He skipped by the wolf who was reading more of the pigs' story and coming to the part where he read that he can't blow the brick house down. Bugs turned the pages to the story of "Little Red Riding Hood", which (of course) the wolf read and then as quickly as he can, the wolf ran to the house, kicked grandma out and put on her nightgown. Bugs arrived and did the "What big _________ you have" routine and mixed it with violent harassment. The wolf fired back and Bugs fired forth. In the end they took off each others disguises and Bugs elected not to give the wolf a present. The wolf pleaded for Bugs to give him the present, so Bugs did and hit the wolf with a cake and saying "Remember, You Asked for It!"

So the chase was on. Bugs hit the wolf with a bat in the dark basement and escaped on a tandem bike, but almost not knowing that the wolf was riding behind him. Eventually, Bugs trapped the wolf on a clothesline. Bugs told the wolf that it served him right for blowing the two houses down which the wolf told Bugs they really belong to the pigs. Realizing that this was a trick, the wolf and Bugs made peace and went to the pigs' brick house so that Bugs would take out his revenge on them for swindling him and putting him into that mess.

When they arrive at the house, they saw the pigs playing Poker. The wolf attempted to blow the brick house down which (of course) he wasn't successful at; but then an explosion occurred and as it turned out, it was Bugs himself who blew it up. 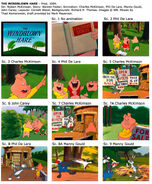 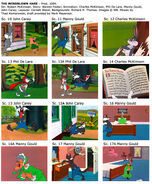 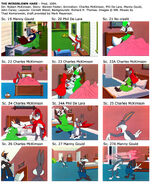 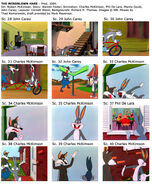 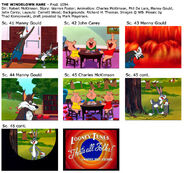 Retrieved from "https://looneytunes.fandom.com/wiki/The_Windblown_Hare?oldid=243308"
Community content is available under CC-BY-SA unless otherwise noted.