The Wise Quacking Duck is a 1943 Looney Tunes short directed by Bob Clampett.

A mild-mannered man is sent by his wife to go out and kill a duck for dinner. He picks Daffy as his victim. The two face off and do battle, only for Daffy to lose to Mr. Meek with him blowing his feathers off and cooking him in the oven. Mr. Meek hears Daffy scream in the oven, fells guilty, and opens the oven door. Daffy is bathing himself in gravy. "Say, now you're cooking with gas." 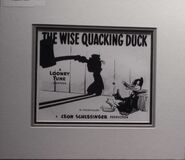