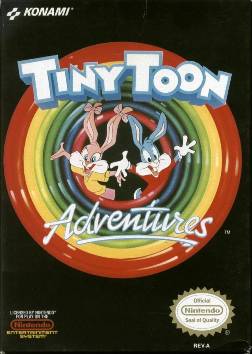 A two-dimensional platform game, the player plays as Buster Bunny in the effort to rescue Babs Bunny from her kidnapper, Montana Max. Players get the help of Dizzy Devil, Furrball, and Plucky Duck to get through a total of six levels. Only one of these three characters can be selected at a time, which is done at the beginning of each level. Each character has special traits that help Buster get through the level. Plucky can briefly fly, Dizzy can spin through walls and is invincible whilst in his spin mode, and Furrball can climb trees and other vertical surfaces, slowly sliding down them rather than plunging down. Various other characters from the cartoon make their appearance as bad guys, like Roderick Rat, Elmyra Duff, Gene Splicer et al.

Elmyra Duff appears after the second stage in the first four worlds, and the player must avoid her until the exit door appears. If they touch Elmyra, they are sent back to the beginning of the world.

Duck Vader also makes a cameo appearance as a secret boss if the number of carrots collected in any level is a multiple of eleven. If the player can defeat him without losing one life in the process, they will gain three lives (assuming the lives don't exceed the life limit).

"A series of plush prairie," as the manual puts it. The third level takes place in a haunted mansion. The boss is Dr. Gene Splicer.[1]

The second level consists mostly of water, where Plucky Duck is adept at swimming. The third level is a pirate ship.[1]

An urban city where cats throw garbage and Sweetie Bird flies around. The boss is a giant gorilla; a parody of King Kong.[1]

Stage 5 takes place in Wackyland. The goal is to catch every Gogo Dodo; succeeding will give the player the final key. Unlike the previous four stages, this is one big level as opposed to being three smaller levels.[1]

The five keys the player collected along the way unlock each door in the mansion. The final boss is none other than Montana Max himself.[1]

Retrieved from "https://looneytunes.fandom.com/wiki/Tiny_Toon_Adventures_(video_game)?oldid=142842"
Community content is available under CC-BY-SA unless otherwise noted.