Elmer Fudd is hunting ducks with his dog Laramore. He shoots Daffy Duck from the sky and apologizes, saying that he is "a great sportsman." Daffy says he wouldn't be so tough without his hunting equipment and challenges Elmer to a "fair" fight.

Elmer is unaware that he is being led to a boxing ring surrounded by many duck spectators. The referee of the fight is also a duck. The odds are clearly against Elmer, since the referee laughs while announcing his name, followed by boos from the crowd, with only Laramore cheering from a separate stand, for which he is knocked down by brickbats thrown at him by the duck spectators. The referee starts complimenting Daffy, like Daffy "Good to His Mother" Duck.

Before the match starts, the referee exhorts the two opponents to "fight clean", winking to the audience, who collectively shout, "Oh, brother!", and calls for "no rough stuff -- none of THIS! Or THIS! Or like SO!", each time demonstrating an illegal move on Elmer and knocking him silly. Daffy, in turn, picks up where the referee left off, asking, "You mean none of THIS? Or THIS?", manhandling (or duckhandling) Elmer similarly every time. Daffy clobbers Elmer with a hammer as the bell is rung. Elmer falls to the mat and the referee provides a quick ten-count. He declares Daffy the winner and new champion. Perplexed, Elmer protests, "I'm not the one to compwain, Mr. Wefewee, but I thought you said no wough stuff! none of THIS! Or THIS! Or wike SO!", giving it back to both the referee and Daffy in extreme exasperation. 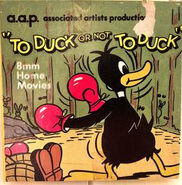 Laremore, a character who only appears in this cartoon