Tokyo Grows is an episode of Pinky and the Brain, originally broadcasted on September 17th, 1995.

The Brain's latest plan involves stealing a shrinking ray in Tokyo, so he can change it. He plans to use on Pinky dressing up as the legendary Gollyzilla, and enlarge him, and have him rampage around the city. Brain will then use the ray on him and make it look as if he has defeated Gollyzilla, making him look like a hero to the public. Things get wacky when the real Gollyzilla shows up, and the ray goes insane.

A running gag throughout the episode is a man smoking a pipe and saying "Yes, I see", when the ray went insane it hit him and he stopped Godzilla. 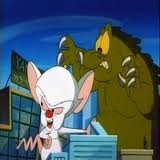 Add a photo to this gallery
Retrieved from "https://looneytunes.fandom.com/wiki/Tokyo_Grows?oldid=193199"
Community content is available under CC-BY-SA unless otherwise noted.