Tweetie Pie is a 1947 Merrie Melodies short from a project planned by Bob Clampett and finished by Friz Freleng.

Thomas captures Tweety, whom he finds outside in the snow, warming himself by a lit cigar. The cat's mistress, whose face is never shown, saves the bird from being eaten by the cat, whom she promptly reprimands.

Tweety is brought inside, and the mistress warns Thomas not to bother the bird. Ignoring this command, Thomas initiates a series of attempts to get Tweety from his cage, each ending in a noisy crash bringing the lady of the house to whack Thomas with a broom, and then finally, throw him out.

The cat tries to get back into the house through the chimney. Tweety puts wood in the fireplace, pours gasoline on it and lights it. The phoom sends Thomas flying right back up the chimney and into a bucket of frozen water.

However, Thomas gets back in the house via a window in the basement and creates a Rube Goldberg-esque trap to capture Tweety, which of course, backfires and injures him instead. Finally, Thomas tries to capture Tweety by running up to the attic and sawing a hole around Tweety's cage, but he ends up causing the entire inner ceiling to collapse (sans Tweety's cage, which is being held in place by a beam). The faux pas creates such a racket that Thomas is sure the mistress will come downstairs and wallop him, and so, he takes her broom, breaks it in half, and tosses the pieces into the fire. This proves to be a bad move, as he finds himself being walloped on the head repeatedly with a shovel...by Tweety.

Bob Clampett was working on a fourth Tweety episode in which Tweety was going to be paired with Friz Freleng's unnamed cat Sylvester. The project, which had a storyboard produced in which it was titled "The Fat Rat and the Stupid Cat" [1] was left sitting when Clampett left for reasons unknown. Eddie Selzer wanted the woodpecker from "Peck Up Your Troubles" to be paired with Sylvester again in a follwup Freleng was already producing, but when he wanted to replace the woodpecker with Tweety, Selzer objected and Freleng threatened to quit. Eddie apologized to Friz later that evening and later allowed Tweety to be used.[2] This was a wise decision for two reasons: 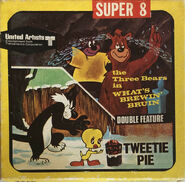 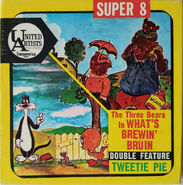 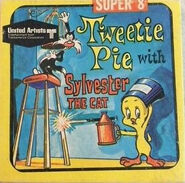 Original titles from a B&W print 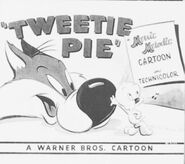 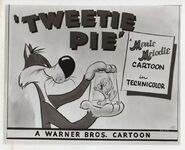 Storyboards for "Fat Rat and the Stupid Cat"