The movie is an updated spoof of Jules Verne's Around the World in Eighty Days. It was the first ever Looney Tunes direct-to-video film, as well as the first (and, so far, the only) long form animated film featuring Tweety in the lead role. Its original working title was Around the World in Eighty Puddytats, which remains on the end credit roll as a title of one of its three major songs. Many of the key creative people from the 1995-2000 TV series The Sylvester & Tweety Mysteries also worked on Tweety's High-Flying Adventure, which commenced shortly after the series wrapped production in May of 1999. Co-producer Tom Minton instigated the project, which was only the second internally produced direct-to-video animated film done at the Warner Bros. Animation division in Sherman Oaks, California.

On the 2nd of October, when Colonel Rimfire, at the Looney Club in London, announces about his beliefs that cats are the most intelligent animals (after his many plans were foiled by Cool Cat), Granny, hoping to raise money for a nearby children's park, makes a wager that her Tweety can fly around the world in 80 days, collecting the paw prints of 80 cats in the process. Sylvester, still hoping to make Tweety his personal snack, is incensed at the thought of some other cat getting the little bird first and vows to follow Tweety around the world and catch the canary himself; unbeknownst to either one, a thief is also present.

Tweety sets a course to Paris, but is blown by a strong wind to the Swiss Alps, where he gets trapped, as does Daffy Duck, a mountain climber, but Bugs Bunny, a snowboarder, saves them both. On October 12th, Tweety goes back to Paris, where he causes Pepé Le Pew, who is running French customs, to mistake Sylvester for a female skunk. Tweety continues on to Venice, but grows overweight after eating too much bird seed. On a longboat, he faces a lot of cats, but he overpowers them and goes back to normal. While attempting to sleep in Egypt, he is chased into a tomb by Sylvester and several other cats, but escapes. In the African jungle, he outsmarts two lions with help from another bird.

In the Chinese Himalayas, he befriends another canary known as Aoogah (the name coming from her ability to imitate a horn, as well as being a pun on Princess Aouda), after rescuing her from a sacrifice. They are taken by more winds into Mexico, Brazil, Argentina and Japan, where they collect stamps and trophies (Aoogah places a sticky note which reads "Send to London" on each one), and eventually make it onto a boat to the United States. Sylvester catches up with them, but two mice cause him to slide into the water. Tweety and Aoogah are able to save him, but end up on a beach in Australia. Sylvester meets the Tasmanian Devil and they chase the two canaries, resorting to a motorcycle, but end up in the ocean.

Tweety, Aoogah and Sylvester ride a windsurfer to San Francisco. After the canaries pick up paw prints in Fisherman's Wharf, Sylvester hijacks a tram to chase them, but ends up on Alcatraz, to the fury of the tram's driver, Yosemite Sam. The two canaries make it safely on a train to Las Vegas, where they escape more cats and Sylvester puts Yosemite on a train out of the city. Afterwards, the canaries go through more cities across the US, finishing in New York City. There, they trick Sylvester into getting onto a Concorde alone.

The two canaries are caught up in an Atlantic hurricane and separated, and Tweety even loses his license to fly, as well as a transmitter on his ankle, leading everyone monitoring the wager to believe he has lost it. Tweety seemingly sacrifices what's left of the wager to save Aoogah. They are reunited on an island, where they are caught by more cats They allow the hurricane to carry them away, and then fly back through the hurricane to escape the island.

In a pub in the English countryside, they discover the thief when he attempts to steal Tweety's license to fly. Aoogah lets out a Horn Scream to get the license back. Sylvester attempts to frame Tweety by passing his license for a stolen passport. He almost succeeds, but Aoogah reveals that there are two passports: one is Tweety's license, having been given to him by the Queen, and the other one, belonging to the Duke of Edinburgh, is the stolen passport, which the canaries had unknowingly stolen during their encounter with the thief. Sylvester is arrested for stealing the Duke's passport, and the canaries leave the pub, while the thief reflects on his idiocy.

Tweety and Aoogah believe they are a day late, until they discover that it's the 21st of December because they crossed the international date line. They are able to get back to London, complete their mission and save the park, and Tweety even gets knighted by the Queen, whilst Sylvester heads to prison. 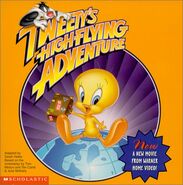 Aside from Tweety, who has the lead role, other Looney Tunes make brief cameos and play some major roles:

Tweety: [after Sylvester gets crushed by a giant globe] Some globe-trotter he is.Bugs Bunny: When life hangs in the balance, you can always depend on one thing: Extreme Sports!Tweety: Thanks. You're a couple of crown jewels.
Bugs Bunny: Hey, it's a living.
[Tweety flies away]
Daffy Duck: Showoff.Sylvester: NOBODY swipes MY canary croissant, mademoiselle!Sylvester: Listen, I know how it looks, but you've got it all wrong. I'm not a skunk!
Pepé Le Pew: Love can never be wrong.
[kisses him]Henery Hawk: We've set the odds at 20 to 1 in Tweety's favour.
[a reply comes through on his phone]
Henery Hawk: Come on, bet some bird seed! Don't be chicken!
Prissy: MY GOODNESS! Haven't we come far enough to stop using that horrid term?!
Foghorn Leghorn: Keep your shirt on, Prissy. He's just, I say just stirring the wagering pot.Tweety: I think this is a good time for me to take a little cat-nap.Tweety: You've heard of the Winking Tunnel? Well, that's the Stinking Tunnel.Tweety: Guess they never heard of the saying: "Birds of a feather flock together."Tweety: Never underestimate a small package.Tweety: Enough of this "backwards" business! Let's show the jet stream who's boss.Hubie: All we need to do is run- [opens a door and sees Sylvester] FOR OUR LIVES!Sylvester: PUNCH IT!
Bike Salesman: Whoa. Safety first, mate.Sylvester: Hey, it's Extreme Sports, not Extreme Peril!Sylvester: Hey, Bright Eyes, step on it! My lunch- I mean, our lunch is getting away!Tweety: Puddy can fly about as well as he can swim.
Sylvester: Oh no. Not the water again!Yosemite Sam: Next stop, Union Square.
[Sylvester hijacks the trolley]
Yosemite Sam: Hey! What the-
[Sylvester releases the brake and drives the trolley at full speed]Yosemite Sam: Stop it, stop it! You'll never make the turn if'n you don't slow down at the bottom of the hill! Pull back on the stick, you nitwit!Yosemite Sam: Slow up, ya dang cat! I think we're back on Market Street!
[reads a nearby sign]
Yosemite Sam: "Welcome to Alcatraz"? That's a closed-up hoosegow! Built on an island!
[starts chasing Sylvester and whacking him with his hat]
Yosemite Sam: YOU GOT US STUCK ON THIS STUPID ROCK, YOU GOOD-FOR-NOTHING FELINE! YOU NO GOOD RAZZIN FRAZZIN KITTY CAT! GET BACK HERE AND TAKE WHAT FOR! COME HERE, BOY!Marvin the Martian: Oh, drat! You sabotaged my Manhattan Destruction Weapon with an inferior grade of Earth condiment!
[walks away]
Sylvester: And I'm a dissatisfied customer.
[condiments fall on him]
Sylvester: Hold the onions.Sylvester: Got you this time, you little-
[gets hit by a cab]Tweety: So long, Puddy! See you in London!
Aoogah lets out a Horn Scream. Sylvester displays his Wanted poster and starts banging on the plane window, screaming.]

The film received a 5.3 rating on IMDb, indicating mixed reviews.