United Artists Corporation (UA) is an American film studio. The original studio using that name was founded in 1919 by D. W. Griffith, Charlie Chaplin, Mary Pickford, and Douglas Fairbanks, with the intention of controlling their own interests rather than depending upon the powerful commercial studios.

The current United Artists formed in November 2006 under a partnership between producer/actor Tom Cruise and his production partner, Paula Wagner, and Metro-Goldwyn-Mayer. Paula Wagner left the studio on August 14, 2008. Cruise owned a small stake in the studio until late 2011.[citation needed|date=]

It is now a subsidiary of Metro-Goldwyn-Mayer, which itself is owned by MGM Holdings.

In 1958, Associated Artists Productions bought copyrights to the pre-1948 Warner Bros. cartoons plus the 1931-1933 Harman/Ising Merrie Melodies, sans "Lady, Play Your Mandolin". a.a.p. shut down two years later, and United Artists bought the company assuming their debt. In such deal, United Artists soon became the copyright owners of the a.a.p. library of pre-August 1948 Looney Tunes cartoons (which were technically under UA's television division), Popeye, and other Warner Bros. content. The company Transamerica bought 98% of UA's stock in the 1960s. When the company decided to exit the film business, they put up United Artists for sale. When United Artists was acquired by MGM in 1981, the rights to the pre-August 1948 Looney Tunes went to MGM.

Due to UA failing to renew copyrights in time, a handful of Popeye shorts, Warner Bros. movies, and some pre-1948 Looney Tunes and Merrie Melodies shorts have fallen into the public domain in the United States as a result. Although Turner Entertainment has access to the original negatives and has restored some of these cartoons on DVD and Blu-ray, the shorts are still in the public domain.

In 1986, Ted Turner and his company Turner Entertainment, bought all of MGM's assets, but not the company itself. This library would merge with Warner Bros. library in 1996, when Turner was bought out by Time Warner.

The assets Turner bought from United Artists were: 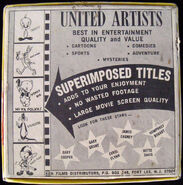 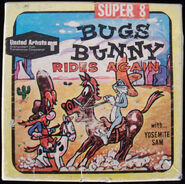 Retrieved from "https://looneytunes.fandom.com/wiki/United_Artists?oldid=176563"
Community content is available under CC-BY-SA unless otherwise noted.