Professor Beest Lee (a pun on "beastly") narrates over clips of animals and their quirky behavior. Scenes include: 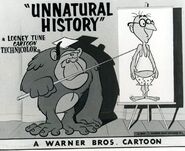 Retrieved from "https://looneytunes.fandom.com/wiki/Unnatural_History?oldid=200587"
Community content is available under CC-BY-SA unless otherwise noted.