Henery Hawk discusses his cravings with his father, who then tells him, "Your mother and I are outcasts, hated and hunted because of what we are: Chicken hawks." Ashamed, he explains that Henery is also a chicken hawk and as such must feed on chickens. More enthusiastic than his father, Henery Hawk sets out to find a chicken, however, as he tries to fly, he falls from the tree and tells the audience, "Someday I gotta learn to fly." Meanwhile, in a barnyard, the Barnyard Dawg deliberately throws a watermelon on an unsuspecting Foghorn Leghorn, who is done filing his nails, muttering to himself while thinking of the Dawg, "EVERYDAY IS THE SAME THING!" Just as the Dawg goes to sleep, Foghorn deliberately spanks the Dawg with a paddle, angering the Dawg into chasing Foghorn, only the Dawg gets choked by the leash and falls. The Dawg now angrily barks at Foghorn, who then deliberately slaps the Dawg, yelling "Ah, SHUT UP!" and walks away.

Henery meets Foghorn, who, seeing the hawk as a potential pawn against the Dawg, tells Henery he is a horse and that the Dawg is a chicken, and Henery Hawk goes up to the Dawg and deliberately bites the Dawg in the tail, causing the Dawg to wake up from his nap in pain and Henery warns the Dawg, "Are you coming quietly or do I have to muss ya up?!", but the Dawg chases Henery, but gets choked on the leash again and falls again while Foghorn whacks the Dawg in the head like he's playing croquet with a croquet mallet and runs with the Dawg angrily barking again, only with a headache. Henery is still running, but Foghorn tells Henery not to give up and Henery literally carries the dog house with the Dawg in it like a train while the Dawg investigates with a mirror, sees Henery and lifts up his house and gives chase but is choked and falls again and Foghorn deliberately puts a knight's helmet on the Dawg and whacks the Dawg in the side of the head many times causing the Dawg's head to literally shake inside. Foghorn tells Henery that the Dawg is a "foxy chicken" and they have to "outsmart him" and Foghorn whispers the plan into Henery's ear. Henery lures the Dawg out of his house by drawing a doorbell and presses it and plays a piano while the Dawg dances to the music and the Dawg gets whacked and trips over a banana peel and a spring while walking clumsily and landing on a rollerskate. When the Dawg surrenders and asks Henery what he is looking for, Henery tells the Dawg, "You're a chicken, I'm a chicken hawk, and I'm gonna eat chicken!" The Dawg realizes he's been the victim of Foghorn's prank and points out, "I'm NO chicken! THAT'S a chicken!" and Foghorn accuses the Dawg, "Don't you call, I say don't you call ME a chicken, YOU chicken!" Henery realizes he's been tricked and he releases the Dawg on Foghorn which starts a brawl between the two of them, only this time, Foghorn is now running while the angry Dawg is now on the warpath against Foghorn. When the brawl takes them into a barn, an ACTUAL horse forcibly ejects them, clunking their heads together in the process. The two foes, shaking hands to prove solidarity, re-enter to double-team the horse. Finally, Henery captures Foghorn, the Dawg, and the horse, and mimics Foghorn, "One of these things, I SAY, ONE OF THESE THINGS, has GOT to be a chicken!" 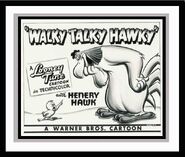 Retrieved from "https://looneytunes.fandom.com/wiki/Walky_Talky_Hawky?oldid=206665"
Community content is available under CC-BY-SA unless otherwise noted.