War and Pieces is a 1964 Looney Tunes short directed by Chuck Jones and Maurice Noble.

The title is a pun on the Leo Tolstoy novel War and Peace.

Wile E. Coyote (Caninus nervous rex) pursues Road Runner (Burn-em uppus asphaltus) and hurls a hand grenade which rebounds off a saguaro. After being blasted in the explosion, the coyote diffuses his tail and then walks away to plan more attempts:

Afterwards, the Chinese Road Runner peeps out of the hole and beeps faux Chinese characters. The Chinese letters then form out "The End". 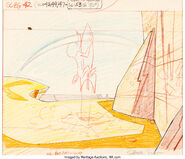 Chinese Road Runner gag, which was uncut on the MeTV airing from Saturday Morning Cartoons