Warrner Bros. Family Entertainment was the family film label of Warner Bros., established in 1992. It was best known for producing Looney Tunes films and shorts and numerous family films and television series in either live-action or animation (especially animated television programs produced by Steven Spielberg).

The logo is notable to have a modern-design Bugs Bunny in a suit and a bowtie, munching on a carrot and leaning on the Warner Bros. shield with one hand, with a sky blue background. This logo was also used for cartoons shows coming from Warner Bros. Animation.

From 1993 till the late-1990s this logo is seen at the beginning of various Looney Tunes VHS releases released by Warner Home Video, right after the Warner Home Video logo but before the classic cartoons.

In 2008, it was closed and rebranded as Warner Bros. Animation, with a similar Bugs Bunny pose, albeit using an early-1940s style Bugs, again eating a carrot but this time without the suit and a bowtie, leaning on the shield with his back, with a red background.

A Looney Tunes Sing Along Tape

Logo on a Holiday promo

Logo on VHS tapes and laserdiscs released between 1992-1997 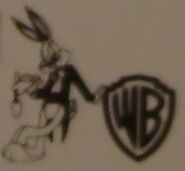 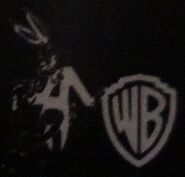 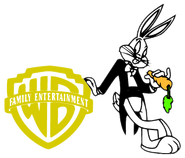 Logo with Bugs on the left side of the shield