The title is a play on "whistle stop," a stop or station at which buses or trains stop only if there are passengers or freight to be picked up or dropped off.

The Weasel is at it again, attempting to steal chickens. Foghorn Leghorn confronts the watchdog, who appears to be too lazy about the situation but is actually on top of it. Foghorn is annoyed by how the laid-back dog acts when he's guarding the chickens. Foghorn attempts to play jokes on the dog, but he's too smart to be fooled. When the weasel arrives looking for a hen or two, Foghorn attempts to turn the weasel against the dog, but the dog is able to counter it, not ending well for Foghorn or the weasel. 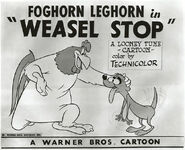