Weasel While You Work

Weasel While You Work

Weasel While You Work is a 1958 Merrie Melodies short directed by Robert McKimson.

The title is a play on the song "Whistle While You Work" from Disney's first animated feature Snow White the the Seven Dwarfs (1937).

Foghorn pulls a sleeping Barnyard Dawg out of his doghouse and rolls him in the snow to make a snowman out of him. Dawg vows revenge, so when Foggy goes ice skating, Dawg sharpens one of his skates to a fine edge. When the rooster skates a circle, it cuts right through the ice and he falls in the pond. Foghorn climbs a hill and rolls a snowball towards the doghouse. Dawg sees it rolling towards him and gathering mass so he moves his doghouse just in time. The rolling snowball arcs off a rock formation and flies high in the sky to fall back down on Foghorn.

As Foghorn is brushing the snow off himself, a hungry weasel attacks his leg. The rooster asks if the weasel would rather have some venison. It agrees, so Foghorn distracts Dawg and places some horns on his head, then sics the weasel on him. Dawg sets him straight and offers to help him get some frozen chicken. As Foghorn is riding his sled, Dawg fells a tree in his path which stops him cold, then dumps a bucket of water on him, freezing him into an ice cube.

Later, Foghorn jabs a sharp stick inside the doghouse. Dawg flies out the door and into a girdle Foggy prepared. This bundles up Dawg to resemble a seal and Foghorn tells the weasel it's seal season. It grabs Dawg and prepares to roast him on a spit, but when he shakes out some pepper, Dawg sneezes and causes an avalanche.

Foghorn ski jumps and lands in the weasel's cookpot. He runs away and the weasel chases him. Foghorn builds a huge snow sculpture of himself, which gets the weasel's attention. Foghorn says that'll keep him busy until the Fourth of July. He returns to the barnyard and sees Dawg's tail protruding from the doghouse. He grabs it and pulls, but it's a fake tail attached to a fireworks rocket which launches him into the sky and explodes. Dawg remarks that the Fourth of July came early this year. 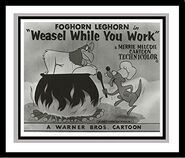