What's My Lion? is a 1961 Looney Tunes short directed by Robert McKimson.

The title is a pun on the Goodson-Todman panel game show What's My Line?

A mountain lion is proudly sitting on his throne, but gets nervous when he realizes that the start of hunting season has begun. He narrowly escapes hunter gunfire as he runs into town and breaks into a house. The house is owned by Elmer Fudd, who returns from hunting. The lion pokes his head into an empty slot for stuffed heads and pretends to be dead, but that proves difficult when tickled by a fly, sprayed with bug spray by Fudd, and is nearly hit by clumsily-thrown darts by Fudd. When Fudd goes into the kitchen to fix his lunch, the lion makes a break for it by putting on a cloak and running outside, but the hunters still shoot at him, so the lion runs back to his hiding place in Fudd's house.

Meanwhile, Fudd prepares a steak with numerous hot spices and a cup of boiling hot coffee, but sets it on the table when he realizes he forgot the bread. The lion leaves the stuffed head slot to eat the steak, unaware it is coated with hot sauce, and when he tries to wash it down with the drink, he gets even hotter, and blows fire. Going back to his hiding spot, Fudd wonders what happened to his steak, but is interrupted by a phone call saying that hunting season is cancelled and that he has to take the hunting signs down. Upon hearing this, the lion leaves his stuffed head slot and runs outside. Other animals, apparently not dead, leave their slots as well. Fudd explains that he set a new record this year for quickest time that the animals ran out on him, and does his trademark laugh. 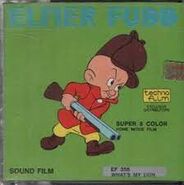 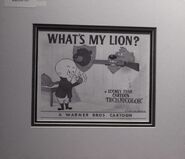 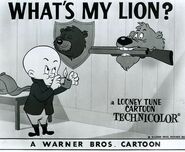