The silhouette of a mighty Viking arouses ferocious lightning storms. It is Elmer Fudd (as the demigod Siegfried). Elmer sings his signature line "Be vewy qwiet, I'm hunting wabbits" (in recitative), before arriving at Bugs Bunny's hole. Bugs watches Elmer fruitlessly jam his spear into the hole to "Kiww the wabbit! Kiww the wabbit! Kiww the wabbit!" Bugs sticks his head out of another rabbit hole, and, apparently appalled, sings his signature line "What's up, doc?" to the theme of Siegfried's horn call from the Ring Cycle. He then taunts Elmer about his "spear and magic helmet". This prompts a display of Elmer-as-Siegfried's "mighty powers", set to the overture of The Flying Dutchman. At that, Bugs flees and the chase begins.

Suddenly, Elmer is stopped in his tracks at the sight of the beautiful Valkyrie Brünnhilde (Bugs in an obvious disguise), riding in grandly on an enormously fat horse. "Siegfried" and "Brünnhilde" exchange endearments, set to the overture to Tannhäuser:

and after the usual "hard to get" pursuit, they perform a short ballet based on the Venusberg ballet in Tannhäuser, capping it off with the duet "Return My Love" set to another section of the Tannhäuser overture. Bugs' true identity is suddenly exposed when his headdress falls off, enraging Elmer and prompting him to command fierce lightning, "typhoons, hurricanes, earthquakes" and, finally, "SMOG!!!" (a word Elmer screams which was not done by Bryan, but by Blanc) to "kill da wabbit!" while music from The Valkyries plays in the background.

Eventually, a lightning bolt strikes Bugs dead. Upon seeing the bunny's corpse, Elmer, as usual, immediately regrets his wrath and tearfully carries the bunny off to the overture to Tannhäuser. Bugs suddenly raises his head and remarks, "Well, what did you expect in an opera? A happy ending?" 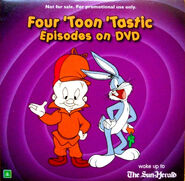 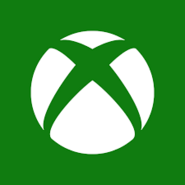 When presented in the 1979 compilation The Bugs Bunny Road-Runner Movie, Bugs Bunny claims that the short was the whole of Wagner's seventeen-hour Opera Cycle "Der Ring des Nibelungen" (The Ring of the Nibelung, which he mispronounced as "The Rings of Nibble-lung" in his Brooklynese accent), condensed into only seven minutes. He also pronounced Richard Wagner the way it looks (wag-ner), instead of Rikard Vagner. Besides the second opera of Ring, Die Walküre (The Valkyrie) and the third opera of the Ring, Siegfried, other Wagnerian music present in the cartoon comes from Tannhäuser and Der fliegende Holländer (The Flying Dutchman). Specific excerpts include: 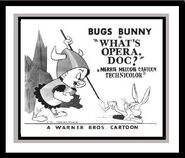 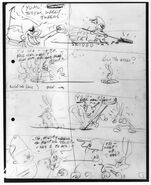