What's Up Doc? is a 1950 Looney Tunes short directed by Robert McKimson.

Bugs is living in a 1940s Modernist house. While relaxing by his pool, he gets a call from the "Disassociated Press" stating that the public demands his life story. Over the phone, Bugs recounts his rise to fame.

Bugs relates that, while in the nursery immediately after he was born, he comes to the startling realization that he was "a rabbit in a human world." By the time he learns to walk, he shows an impressive talent for entertainment by successfully playing the "Hungarian Rhapsody No. 2" by Franz Liszt on his toy piano.

Early in Bugs' career, there is a gag repeated several times, in which there is a sign marquee featuring three of Bugs' Broadway appearances, Girl of the Golden Vest, Wearing of the Grin, and Rosie's Cheeks. Music starts, the curtain rises, and Bugs Bunny and the Chorus Boys walk on stage, singing and dancing, "Oh we're the boys of the chorus/We hope you like our show/We know you're rooting for us/but now we have to go."

Years later, he decides to take an ballet academically and eventually becomes the star pupil. After graduation, Bugs begins to pursue a professional career as a Broadway star, which he eventually threw out the script to Life with Father proclaiming it would never be a hit, but only manages to be a chorus boy in three productions: Girl of the Golden Vest, Wearing of the Grin, and Rosie's Cheeks. In all of the shows, he and the chorus sing the same song, "Oh! We're the boys of the chorus. We hope you like our show. We know you're rootin' for us. But, now we have to go" over and over again.

After the performance, he is eventually approached by a producer of an unnamed show. The show's star has become ill, and the producer wants Bugs to take his place. He agrees, but the audience is unimpressed by his juggling performance and he's eventually hooked off stage. Angered at the prospect of resuming work as a chorus boy, Bugs quits show business until he's offered the "right part."

That winter, a depressed Bugs confines himself to a bench in Central Park, which he is also with a few other out of work actors, that are caricatures of Al Jolson, Jack Benny, Eddie Cantor, and Bing Crosby.

One night, Jolson spots Elmer Fudd, a big vaudeville star, walking around central park, and tells the others that Elmer is looking for a partner. The four do their trademark phrases/songs, but Elmer ignores them. When he reaches Bugs, he recognizes him and says, "Why are you hanging around these guys? They'll never amount to anything." He eventually offers him a role as his sidekick in his vaudeville act. Bugs accepts, and the two embark on a nationwide tour.

The act consists of Elmer telling a joke to Bugs and then physically delivering the punchline to him, which often involves Bugs becoming the butt of Elmer's jokes every time. After several performances, Bugs gets tired of the act, and decides to change up the routine. So when Elmer sets up the joke, Bugs delivers the punchline, just as physically as Elmer had, and dances off-stage.

Elmer is infuriated with Bugs and, pointing his rifle at him, making him back the rabbit all the way back onstage, causing Bugs to get scared with Elmer and nervously say, "Eh, what's up, Doc?" The audience begins laughing and applauding to the act.

The two eventually get surprised with this, and Bugs then suggests Elmer that they may have a new gimmick for the act and says, "Let's do it again." They do, and receive the same positive audience response, making Bugs Bunny and Elmer Fudd continue the act and later adopt their well-known hunter vs. hare formula, which Bugs wins repeatedly.

Afterwards, fan mail and offers were pouring in, and the two of them attract the attention of Warner Bros. to which Elmer and Bugs pass a screen test in which they perform the title musical number, and the studio signs them on as film stars.

The story eventually reverts to the present day as Bugs looks at his watch and notices that he is late to the set to begin filming for his first role, in a film that was written with him in mind. At the filming, it's revealed that the part is chorus boy singing and dancing "Oh we're the boys of the chorus/We hope you like our show/We know you're rooting for us/but now we have to go" yet again, much to Bugs' chagrin. 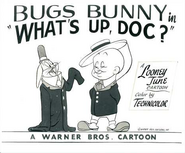 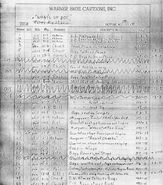 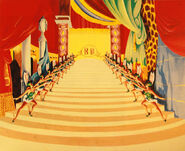