What Makes Daffy Duck is a 1948 Looney Tunes short directed by Arthur Davis.

Duck season is open and Daffy is running scared. While taking a shower, Daffy is grabbed by both Elmer and a Hungry Fox (Chuckles). The two fight over who get Daffy.

Daffy sneaks across the meadow, dodging hunter's bullets. He hides behind a tree, his teeth chattering and knees knocking. He is startled on seeing the audience, but calms down and explains, "You see, it's duck season, and, confidentially, I'm a duck!"

He crawls across the meadow and takes a morning shower while singing "King for a Day". While he sings in the shower, a fox and Elmer Fudd approach the shower from opposite directions, each unaware of the other's presence. They reach into the shower to grab Daffy, but he emerges from the shower untouched. They look inside the curtain and see their fingers literally tied together, much to their annoyance.

The fox and Elmer start grabbing at Daffy, but Daffy stops them. He tells them to race to a pine tree, and the first one to reach it "gets tender, juicy me as first prize." When he fires the starting gun, only Elmer takes off; the fox stays behind, grabs Daffy, and flees. Daffy calls to Elmer and tells him he has been swindled. Elmer starts chasing after the fox. Meanwhile, Daffy deliberately squirts oil on the hill, and the fox slides downhill. At the bottom of the hill, Elmer aims his gun at the fox and demands that he leave. The fox turns to escape, only to run smack into a tree, knocking him out cold.

Now Elmer turns his gun on Daffy, but Daffy puts Elmer on a guilt trip, melodramatically complaining about the misery of being constantly pursued by hunters. Catching Elmer off guard, he hits Elmer on the head with a mallet, knocking him out.

A little later, Daffy is admiring himself in a mirror. Elmer puts on a semi-realistic female duck disguise and calls to Daffy from a pond. Daffy begins flirting with the duck, but dives underwater, sees Elmer's boots, and sees through his game. Still, Daffy plays along, and offers to bring some art collectibles for "her" to see. He slips away and awakens the fox (who was still unconscious until now) with a duck call. The fox sees the "female duck", grabs it, and runs away, until he notices the neck stretching. Curiously, he confusedly asks "What kind of a duck is this?" as he opens the lid of the duck costume, and Elmer pops out pointing his gun in the fox's face. Elmer, still in costume, chases after the fox, but is caught by the boot with a long rope, pulling him out of the costume and getting him entirely stuck in the boot, sadly asking himself, "How am I ever gonna catch that scwewy duck?" Daffy, who lassoed him, replies, "Precisely what I was wondering, my little nimrod!"

Suddenly, the fox grabs Daffy by the throat and flees the area with him, trying to put as much distance between himself and Elmer. But just when he thought he had gotten far enough away, he turns and runs into Elmer and his gun. Elmer forces the fox to give up Daffy and sends him away. Then Elmer, by now greatly irritated, drags Daffy away to shoot him, while Daffy calls to the fox to stop Elmer. Elmer pins Daffy to a tree and squeezes the trigger, but instead of gunfire, there is a pop. The fox has returned and stuck his fingers in the gun barrel to stop Elmer. The fox and Elmer start cursing in each others' faces, and their argument turns to fisticuffs, while Daffy watches from atop the tree, cheering them on.

While the fox and Elmer are fighting, a dog in a ranger uniform appears and nails two signs to the tree: DUCK SEASON CLOSED and FOX SEASON OPEN. He blows a whistle. The fox and Elmer read the signs, and then Elmer glares menacingly at the frightened fox, who flees for his life. The dog gives Elmer a more appropriate hunting hat and a horse to ride, and Elmer chases the fox on horseback. As the fox, Elmer and his horse run away into the distance, the dog pulls off his rubber mask to reveal Daffy in disguise, and he comments, "Obviously, I am dealing with inferior mentalities."

All prints have the 1950 green Merrie Melodies ending title card.

When this short was broadcast on the former WB Network the following scenes were edited: 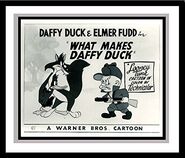 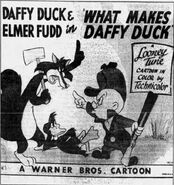 This scene was cut on The WB

Another scene cut on The WB