What Price Porky is a 1938 Looney Tunes short directed by Bob Clampett.

The title is a play on the 1926 film What Price Glory?

When Porky goes to feed his hens and chickens, a group of ducks steal the corn he sets out. After sending a document filled with insults from "The Ducktator" (Daffy Duck, aka "General Quacko"), war erupts between the chickens and the ducks. Newborn chicks form battalions from the moment they hatch, with the chickens digging trenches. The ducks goose-step in the marsh, saluting "General Quacko", as they use swans and geese as battle-carriers and airplanes. Porky turns the tide with a machine gun improvised from a wringer washer and a bag of corn, but it's the ducks who get the last laugh.

Cels from the redrawn colorized version 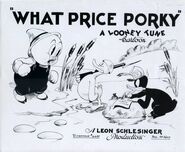