Which Is Witch is a 1949 Looney Tunes short directed by Friz Freleng.

Bugs Bunny is exploring Dark Africa, but he runs into a short, big-lipped, dark-skinned witch doctor, Dr. I.C. Spots, who wants to use him as a key ingredient in a prescription or recipe. At first, Bugs tricks the mad doctor, but the doctor threatens Bugs with his spear and takes Bugs backs to his hut. Initially believing he is enjoying a hot bath, Bugs notices that he's being cooked and escapes, and Dr. Spots chases him. Bugs disguises himself as a stereotypical Zulu native woman but this ploy fails. In the river, he finds and swims to a ferry boat. As Dr. Spots follows Bugs to the boat, a crocodile eats him, and swims over to the boat. Although the witch doctor is his enemy, Bugs wrestles with the crocodile, finally emerging from the water with a crocodile skin handbag, from which Spots emerges unharmed, clad in crocodile skin attire. 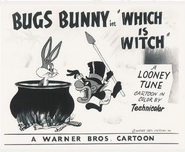