Who's Kitten Who? is a 1952 Looney Tunes short directed by Robert McKimson.

A baby kangaroo, named Hippety Hopper escapes from the crate that he was put in at the zoo office and runs into the house of Sylvester and his son, Sylvester Junior. They mistakenly think that Hopper is a giant mouse. Sylvester is constantly pummeled over and over again by the Kangaroo. In the end Junior puts a paper bag over his face, in shame. Later when he erroneously thought that Hippety swallowed his son alive when catching him with fly paper, it was Sylvester who put a paper bag over his face in shame similar to what his son did earlier, while Junior who emerges out of the fly paper stuck on Hippety's body alive and unharmed, shared his lollipop with Hippety.

The version of this cartoon that aired on ABC's The Bugs Bunny & Tweety Show shortens all instances of Hippety Hopper kicking Sylvester in the face and head.[1] 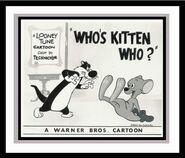 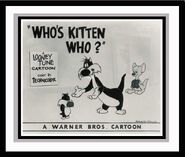 Production Background with a Sylvester cel from "Tweety and the Beanstalk"

Production Background
Add a photo to this gallery

Retrieved from "https://looneytunes.fandom.com/wiki/Who%27s_Kitten_Who%3F?oldid=221947"
Community content is available under CC-BY-SA unless otherwise noted.