Who Scent You? is a 1960 Looney Tunes short directed by Chuck Jones.

The cartoon opens with a man carrying flowers across the streets of Paris. Penelope Pussycat spots a sign that reads, "Pleasure Cruise Leaving Today." It amazes her. Although when she tries to board, she's forced away. In the meantime, Pepe Le Pew is singing. He stops to wave at the ship that is sailing away, until he sees what he thinks is a female skunk (Penelope Pussycat) trying to climb onto the ship. Pepe runs on the water, until he realizes that he can't swim, however that doesn't stop him, and he even runs under water. Penelope arrives on the ship, but everyone mistakes her for a skunk and abandons the ship. Pepe arrives on the ship, looking for Penelope. As the cat is walking, Pepe emerges from a pipe, and attempts to get affectionate with her, but she runs off as usual. Pepe enters a beauty saloon attempting to dry himself. He comes out looking like a cream puff. Next he strokes his tail with a hairbrush, and hopes to get back to Penelope. He finds her on top of the ship, but she runs away from him, and it takes him a few seconds to realize. She runs over to where there are several beds and hides under the covers, hoping to get away from the skunk. However Pepe is right next to her disguising himself to look like something that a New Yorker would wear, but once again she flees from him. The chase continues, and in traditional Pepe manner Penelope is running while Pepe is hopping. Eventually, Penelope's attempt to get away from Pepe causes her to enter a life boat and escape the ship, but while on the life boat, she discovers that Pepe is on it as well. At the end of the episode, Pepe says, "One thing you can not do, you cannot walk home from a boat ride." 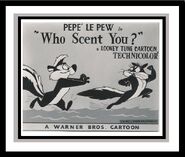 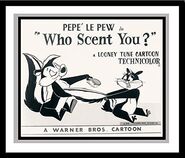 Retrieved from "https://looneytunes.fandom.com/wiki/Who_Scent_You%3F?oldid=222106"
Community content is available under CC-BY-SA unless otherwise noted.