Wild About Hurry is a 1959 Merrie Melodies short directed by Chuck Jones.

The title is a pun on the song "I'm Just Wild About Harry".

Wile E. Coyote is brandishing scissors on top of a high-rise tree branch, ready to cut the rope and drop a rock onto the passing Road Runner. The rock displays the title, and when it falls to the ground and barely misses, the credits appear in the dust. Director Chuck Jones' credit is displayed upon a rocket that the coyote plans to ride. The rocket is paused in mid-flight to show the coyote's Latin name: Hardheadipus Oedipus. Road is still leading the way, and his flight is paused to show his Latin name: Batoutahelius. The chase goes well for Wile, until the rocket slams into a low plateau. Luckily enough, the coyote still can continue the air chase. He almost catches Road, but slams his head on a rock arch before he can pounce. Wile, looking like a sunflower, trudges off.

1. Hoping for better luck this time, Wile takes delivery of an ACME giant elastic rubber band and attempts to launch himself off a slingshot, but only succeeds in going about two feet before face planting. The coyote poses innocently on a rock perch until Road passes by below, and soon comes up with his next plan.

2. Again hoping for a big smash, he flips a clam-shaped rock across a thin outcropping, but when Wile finally pushes it over the edge, it flips over and the end attaches itself to the precipice. Wile attempts to push it down, and then stomps on and off it six times, with no result. Then, he jumps fully on and puts his whole might onto the rock, and succeeds. He continues to stomp on the rock until he realizes he's falling. He looks down and sees the ground, then attempts to jump off the rock. However, all that does is turn the rock in circles. Not giving up, Wile thus manages to slow the rock down, but the end result is the rock drilling through a large rock face and into a train tunnel, where the coyote is hit and thrown all the way back out. A small piece of the rock plants him on the ground neatly, and a relieved Wile steps off, but finds himself continuing to spin periodically (like the Robert McKimson-created character Tasmanian Devil) as he walks.

3. Across from an order form for an extremely large railroad construction job that Wile has done to attempt to ensnare his nemesis, the tracks turn from almost straight down to about 60 degrees downwards; however, the spaceship breaks directly through the mounted railroad and face plants on the ground.

4. He baits Road's bird seed with iron pellets and leaves a bomb and a magnet by him; however, the magnetic force is strong enough to break the connection between the two items, leaving the bomb close to the coyote. A puzzled Wile pokes his head up from his hiding place and is obliterated by the bomb.

6. The coyote plugs himself into an ACME Indestructo Steel Ball to avoid them, and rolls himself off an escarpment. However, he narrowly misses his intended target (Road) and pitches himself onto a serac and into a dam. He rolls himself up out of the water, and then directly down a wall, over several rocks, and then back into the water. Wile finally pokes out of the ball to realize where he is going: off the edge again. He falls directly down the waterfall, into a mash of water, and finally out of the dam, but instead onto an old enemy, railroad tracks. He gets out, relieved, but soon gets back inside for shelter when he sees an approaching train, which hits the ball and sends it directly into an abandoned mine field. One explosion dents the ball and sends him back into the air, and then down to the same escarpment as before. The entire sequence repeats, and after Wile misses him for a second time, Road holds up a "here we go again" sign, beeps, and dashes to the side. 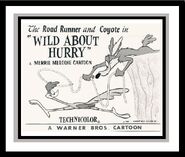 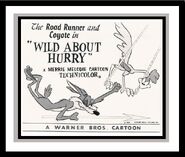 Title card (unrestored)
Add a photo to this gallery

Retrieved from "https://looneytunes.fandom.com/wiki/Wild_About_Hurry?oldid=241323"
Community content is available under CC-BY-SA unless otherwise noted.