Wild and Woolly Hare is a 1959 Looney Tunes short directed by Friz Freleng.

In the town of Canasta Flats in 1889, past the Last Chance Saloon and the Next to the Last Chance Saloon, patrons are gathered in the Fat Chance Saloon. A mustached cowboy tells his friend that he hears Yosemite Sam is in town, and the friends makes up an excuse about leaving a cake in the oven and flee. After Injun Joe hears another cowboy tell his friend about Sam being the "fastest gun west of the Pecos," he states all that is true, because Sam never met him. When the sheriff sees Sam coming into town and a brown mustached customer sees him heading to the Fat Chance Saloon, Injun Joe asks the customer to hold his beer so he can have a showdown against Sam. After Injun Joe is shot, the customer happily downs the beer, saying he always gets it for free that way. As Sam approaches, everybody flees.

Sam enters the saloon, states who he is, and challenges everyone in the saloon, until he gets interrupted by a voice telling him to shut up. When Sam comes up to the pink-shirted cowboy who stayed and demands to know who told him to shut up, the cowboy reveals himself to be Bugs Bunny, who admits he said it. Sam tells Bugs that his backtalk has led him to a duel. "Stranger, you just yuppped yourself into a hole in the head!" Bugs shuns Sam for his bad breath, "You've been eating onions!" Sam then retorts, "And you're gonna be eating lead! I'm a warning ya stranger!" Bugs, however, informs Sam "I thinks it's fair to warn you that I swing a fast-shooting iron myself." To prove it, he calls his shot to ricochet off various objects before parting Sam's head down the middle. After Bugs fires and Sam sees the bullet come in, he ducks and tells Bugs he missed, but Bugs tells him to wait, and Sam's hat falls off in half, revealing parted hair.

Unimpressed at this skill of sharp shooting, Sam shows Bugs some real shooting by tossing a can in the air and shooting it full of holes. To top it, Bugs tosses the same can up, but shoots Sam in the face instead. When Sam threatens to blast Bugs for that "accident," Bugs suggests that they settle things "in a gentleman-like manner", to which Sam agrees to, even though its against his principles

They begin the typical ten-pace and fire, only with Bugs going the same way Sam does, when Sam cheats in the count, "1, 2, 3, 4, 5, 10!" Sam turns to fire, but fires directly past Bugs, who then kisses him on the nose. After Bugs does it again, Sam calls off the "Gentlemen's Duel" and forces Bugs to fight "dirty", so they each go to opposite ends of a bar shooting at each other. As Sam goes to one end, Bugs blasts him in the face, and when Sam tries to return, Bugs outruns and blasts him again. Unfortunately, their fight is interrupted when Sam hears a train whistle. Seeing that it's 5:15, Sam tells Bugs that he's cutting the gunfight short so that he can catch and rob the train.

Just as Sam hops aboard his horse and rides off after the train, Bugs follows on another horse. Sam orders Bugs at gunpoint to go back so he can rob the train, but Bugs vows that he's going to save the train. Right after Bugs hops aboard the engine's cab of the train and switches his cowboy hat with a train engineer's cap, Sam orders Bugs back at the count of five. Just as Sam reaches four, his horse makes him hit a telegraph pole. When Sam catches up again and tries counting to three, but when he gets to two, he runs into the wall of a tunnel. He catches up again and tries just counting to two, but when he says two, he and his horse fall off a trestle bridge and into a river below.

Sam, however, rides on ahead of Bugs and boards another locomotive waiting on a siding. Thinking this will make Bugs stop, Sam calls out to Bugs to stop his train because he's got one of his own. Bugs, instead, calls out to Sam to stop his train. Both openly state that neither will stop their train unless the other stops his first. Thinking Bugs wants to play dirty, Sam tells Bugs they'll see who stops their train first when they crash and advances the regulator in his locomotive. Bugs accepts this duel and advances the regulator of the engine in his train. As both engines rush toward each other head on, Sam keeps a stern face and Bugs remains calm. Almost to collision, Sam considers blowing his locomotive's whistle, but instead ducks down to wait for the crash. Bugs, however, extends the "legs" on the engine of his train so that Sam's locomotive passes harmlessly underneath. Just as Sam gets up and wonders why there was no crash, he spots a sign reading "End of Line" and his locomotive falls off an unfinished trestle bridge and into a lake below.

Bugs then calls out a goodbye to Sam and drives off to St. Louis. Sam's locomotive is up to its smokestack in the lake. Sam pokes out of the smokestack and openly admits that he hates Bugs. 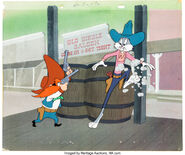 Production cel with a production background from "Drip-Along Daffy" 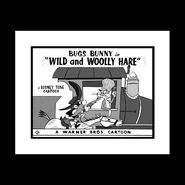