Sick of being a cheap imitation of Bugs Bunny, Willie Wombat requests to be used in a different cartoon. Unfortunately, he finds himself in a Wile E. Coyote (Carnivorous Hungerious) costume in the desert, with Taz as the Road Runner (Coyotius Favorite Mealius). When his ACME rocket skates leave him battered and bruised he recognizes his situation and asks for another change. Next he appears in a Sylvester costume trying to catch Taz in a Tweety suit. After another pummeling, he finds a Barnyard Dawg costume and snoozes in the doghouse until Taz as Foghorn Leghorn comes along. Tired of this, Willie whispers an original concept to Taz and he agrees, but there's no more time and the iris closes. It reopens briefly and Taz as Porky Pig grumbles "That's all, folks!" 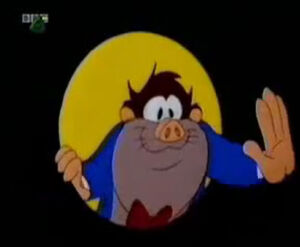 Retrieved from "https://looneytunes.fandom.com/wiki/Willie_Wombat%27s_Deja_Boo-Boo?oldid=149719"
Community content is available under CC-BY-SA unless otherwise noted.