"Witch hazel" is the name of a North American shrub and the herbal medicine derived from it.

The animator Chuck Jones, of his own admission, got the idea of Witch Hazel from the Disney cartoon "Trick or Treat" (1952), which featured a good-natured witch squaring off with Donald Duck. Enamored of the character's voice characterization, provided by June Foray, Jones developed his own Witch Hazel character for the Bugs Bunny short "Bewitched Bunny" (1954). The story retells the classic fairy tale "Hansel and Gretel", and Witch Hazel, naturally, plays the witch who tries to cook and eat the children. Bugs Bunny witnesses her coaxing the children inside, however, and saves the youths from Witch Hazel's clutches. However, once the witch realizes that Bugs is a rabbit, she chases him to put him into her witch's brew. Bugs eventually uses Hazel's own magic against her and transforms her into a sexy female bunny, prompting the comment, "But aren't they all witches inside?" As Jones was unable to get Foray to play the role, Bea Benaderet supplied the witch's voice.

Despite their common name, Jones's Witch Hazel is a much different beast from her counterpart in the earlier Disney film. The Looney Tunes character is highly stylized. Her rotund, green-skinned body is wrapped in plain, blue cloth and supported by twiglike legs. She has wild black hair from which hairpins fly whenever she zooms off on her broom, and she wears a crumpled black hat. Her nose and chin jut bulbously from her face, and her mouth sports a single tooth. She's a more villainous creature than Disney's witch, as well; the Looney Tunes Hazel lures children into her house to eat them. Nonetheless, she has a strong sense of humor; she frequently says things that cause her to break into hysterical, cackling laughter. An earlier, and even darker "Witch Hazel" character exists in the Harman-Ising Happy Harmonies short "Bottles", who threatens to kill the shrunken pharmacist.

Jones finally succeeded in wooing Foray into taking on the role of Witch Hazel for the 1956 cartoon "Broom-Stick Bunny". Foray had reservations about Jones "stealing" a character from Disney, but Jones knew that there was no way for Disney to establish ownership of the name since "witch hazel" is the name of an alcohol rub. Foray would perform the character for the final two cartoons in the series.

"Broom-Stick Bunny" is usually cited as Jones' funniest Witch Hazel outing. The cartoon begins with Hazel asking the genie in her magic mirror who's the ugliest one of all (a plot similar to the one in Snow White, but the opposite). The scene cuts to Bugs trick-or-treating on Halloween dressed as a witch. When he visits the isolated house of Witch Hazel, she mistakes Bugs-in-witch-costume for an actual witch. Jealous that this newcomer is uglier than herself, Hazel invites the "witch" inside her strange home (beautifully rendered by layout artists Ernest Nordli and Philip DeGuard, and including a 'Magic Broom Closet') for some "Pretty Potion" disguised as tea. Bugs removes his mask to drink, sending her into a frenzy and mad dash; a rabbit's clavicle (a bone in the shoulder) is the last ingredient in her witches brew. Hazel then chases Bugs and soon captures him, by tricking him with a carrot. Hazel was about to kill Bugs, but when she looked into his big sad eyes, she cried and said that he reminded her of her pet tarantula, Paul. Bugs then tried to calm her down with a beverage (the Pretty Potion from earlier). In the end, Hazel unknowingly drinks the Pretty Potion (it's unknown if it Bugs did this on purpose or by accident), a fate worse than death for a woman who relishes in her croneliness. The potion transforms Hazel into a young and beautiful redhead (with a hairdo that, according to Foray, matched her own in a tribute to the actress). Now with a slender but curvaceous figure, Hazel's wearing a tight sea green/teal dress that shows off her legs and the top of her cleavage. Horrified at her appearance, she runs to her magic mirror and (in a newly softened, sexier voice matching her beautiful appearance) meekly asks if she's still ugly. The genie, seeing Hazel's sexy new appearance, instantly falls in love with her and lunges to grab her after giving a Bob Hope-like "ROWR, ROWR." Hazel then flies off into the night on her flying broomstick with the genie slowly gaining on her riding his magic carpet. Bugs then calls Air Raid-headquarters about them. Critics have praised the film's witty dialogue, written by Tedd Pierce, such as Hazel's question to Bugs-in-costume: "Tell me, who undoes your hair?" He replies, "Do you like it?", to which her response is a gleeful "Like it? Why, it's absolutely hideous!" Subsequently, when she leaves the room to prepare the beauty enhancing concoction, she encourages him to "Make yourself homely!"

Jones would pit Bugs against Witch Hazel in one final cartoon, "A Witch's Tangled Hare" (1959), a parody of Macbeth. Rabbit is once again the missing ingredient to Witch Hazel's brew, and Bugs happens to be in the area. Meanwhile, a William Shakespeare look-alike named Sam Crubish observes the action in search of inspiration.

Witch Hazel has since appeared in various Warner Bros. productions, such as the movie Space Jam (1996), the video game Looney Tunes Collector: Alert! (2000), and one episode each of The Sylvester & Tweety Mysteries and Duck Dodgers (who portrayed as Lezah the Wicked). She was also a boss in Bugs Bunny: Lost in Time.

In The Looney Tunes Show, Witch Hazel is portrayed as Witch Lezah. She is the mother of Gossamer, and she is voiced by Roz Ryan. Her characterization is drastically different from earlier appearances; she speaks with an African-American accent and is a serious character, as opposed to the psychopathic "evil witch" characterization she had in previous appearances.

Witch Hazel since then later reverted to her original characterization in New Looney Tunes, where she appeared in only three episodes in Season 3. 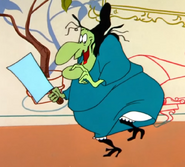 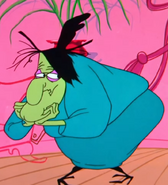 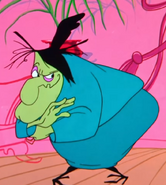 Witch Hazel as she appears in New Looney Tunes

Witch Hazel in Tiny Toon Adventures with Hugo and Oogie

As Lezah the Wicked in Duck Dodgers

Witch Hazel in a deleted scene from Who Framed Roger Rabbit