The title and introductory music are inspired by the 1942 film Yankee Doodle Dandy, a major hit and another Warner release. Other than the fact of both films being about show business, they have no plot elements in common.

Daffy Duck, agent to the stars, complete with business card that flashes like a theater marquis, does everything he can to convince Porky Pig of "Smeller Productions" that his preadolescent client "Sleepy LaGoon" can become a star. This annoys Porky, as it is his day off and he has planned to play golf.

Daffy tells Porky what his client can do, while actually performing various schticks himself in his usual wild and frenetic way. After trying various ways to escape, Porky locks Daffy in a huge vault and takes off in a plane, only to find out that the pilot of the plane was Daffy. Porky jumps out with a parachute while Daffy follows. Porky is chased back to his office. Finally, Porky relents and asks to see what his client can do. "Sleepy", a small and droopy-eyed duck who has whiled away the whole time slurping a huge all-day sucker which he keeps in a banjo case, finally gets to perform. "Sleepy" begins to sing a song in a strong baritone voice. He starts out well, then tries to hit a high note, and goes into a coughing fit. 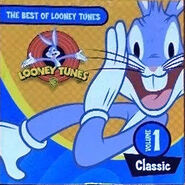 Daffy pitches to Porky, whose clients apparently include his Warner co-stars