You're an Education is a 1938 Merrie Melodies short directed by Frank Tashlin.

The brochures in a travel agency spring to life. 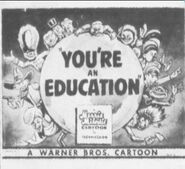