The credits are shown, and the coyote's Latin name (Evereadii eatibus) is among them. To the left, Wile E. Coyote points at the words and then himself. Road Runner then pulls up behind him and beeps, sending the Coyote into the air. Road Runner's name is shown (Digoutis-hot-rodis) before he moves off stage, leaving a dust cloud for Wile E. to land in. The chase starts, and the Coyote slowly gains on his opponent until Road Runner dodges off the road, leaving Wile E. at the mercy of an approaching bus. The Coyote kicks up a pothole and turns the other way, successfully outrunning the bus. However, as he taunts the bus, he runs directly off a cliff. As Wile E. hurtles towards the left, he pokes his tongue back in and points worriedly at the void below him. Then, he slams into a mountainside and soon suffers gravity.

Road Runner pulls up to the top of the mountain that Wile E. ran into and beeps to get the coyote's attention. Fueled by rage, the Coyote climbs the mountain, but soon falls back down. His second climb causes the entire edge of the mountain to fall as the Coyote scrambles to the top. Wile E. climbs to the top of the precipice and prepares to chase Road Runner, but eventually realizes he's on his way down. He can only wince in puzzlement before hitting the ground a third time.

1. A simple plan - simply loading himself into a bow - leads to a simple denouement: running into the wood instead of going towards the bird.

2. Rather than face Road Runner directly, Wile E. uses a grenade mounted on top of a model airplane to take out Road Runner from above. However, when he sets the propeller in motion, only the propeller flies into the air. The Coyote soon figures out the situation and throws the entire model airplane into the air, but the grenade still remains in the air, spinning behind the Coyote before exploding.

3. Returning to simplicity, Wile E. uses a wedge to throw a large rock, but it results in self-squashing.

4. This time, Wile E. lays out iron pellets covered with bird seed for Road Runner to eat, while lying in wait on a high cliff with a magnet on a fishing line. However, the magnet attaches itself to a power line, electrocuting the Coyote and causing his nose to flash like a light bulb. The Coyote unscrews his nose and gazes at its flashing, looking amused.

5. The Coyote then attempts to load a cannon, but as he pounds in the cannonball with a stick, the cannon fires the two items out of it, with the Coyote still hanging on to the stick. Gravity results, and Wile E. and the stick land into the ground, to be pounded down by the cannonball.

7. Hoping to out-corner his rival, Wile E. greases his feet with axle grease and glides across the mountaintop, but soon sees the edge of the cliff. With no alternative, he grabs onto a saguaro and gets speared by its spines. Now, he can spot Road Runner's trajectory and leaps off down the mountain slope, but instead of stopping in the middle of the road, he continues down the mountain and drops off it, and then onto the power lines seen earlier. Wile E. surfs these with no way to stop himself, but when he reaches the ground, he moves directly onto a railroad track, complete with an approaching train! Fortunately, before it hits the Coyote, he moves onto a side track.

Wile E. points happily at the receding train, but now sees he's going into a tunnel with another train coming out of it. Wile E. strokes himself against the wind, barely keeping pace. The train is labeled: "NEW YORK EXPRESS / NON STOP"; Road Runner is in the conductor's compartment. 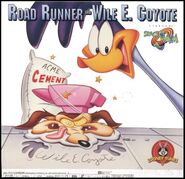 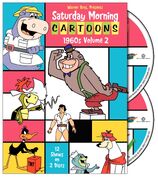