Zipping Along is a 1953 Merrie Melodies short directed by Chuck Jones.

Road Runner is "zipping along" by a train, and the camera zooms in and then freezes for his "Latin" name: Velocitus Tremenjus. The Road Runner leaves the train and runs onto the main roads, with the coyote watching from above. He glances from side to side, and the camera freezes for Wile E. Coyote (Road-Runnerus Digestus) halfway through his head turning. True to this name, he ventures down the mountain and toward the road, waiting for the familiar Beep-beep sound; when this reaches his ears, he jumps into a four-way intersection, but the Road Runner mows him down from behind. When the seething coyote stands up, facing the opposite direction, he is flattened from the other side, and then eventually from all four directions. Wile E. looks increasingly annoyed as this sequence repeats over and over.

1. Lying in wait behind a rock with a hand grenade, the coyote mistakenly grabs the grenade with his teeth and throws the pin at the Road Runner, and once Wile realizes the gaffe, the explosion hits.

2. Wile E. now inspects the roads from a high overlook and peers out to see that the Road Runner has disappeared temporarily. That ends when the bird pops up behind him and beeps, then dashes away, leaving a life-size cloud of dust behind that also beeps at the coyote. He reclines on the rail, miffed at the turn of events.

3. In the regular desert scenery, Wile E. gingerly drops a bunch of mousetraps onto the road, but when Road Runner zooms past, instead of getting trapped in them, the traps drop onto him in his trench hideout. The coyote's reaction is delayed briefly before he yelps in pain.

4. Resorting now to ACME products, these being a kite kit and bomb, Wile E. leaps in the air several times in an attempt to go airborne, but soon runs off the edge of the cliff he is on, and he falls to the ground and his own bomb explodes on him.

5. Road Runner is zipping along some roads while Wile is chopping down a power pole. Wile E. confirms the path of the Road Runner and finishes chopping, but he is too late. When the power pole that he chopped traverses the road, all of the other poles fall as well due to the power lines pulling them down. The one directly to the left lands directly on him and knocks him into the ground.

6. Living up to the Wile part of his name, Wile E. offers bird seed mixed with steel shot to the Road Runner, who stops his road-burning and has a quick snack. Wile jumps out behind the bird as he speeds away with a giant magnet, but lucky only he could be, a big TNT canister is attracted to the magnet and another explosion results, twisting the magnet into a pretzel and knocking Wile E. back through a rock face.

7. Delving deeper into wily trickery, the coyote learns hypnotism from a book to induce the Road Runner to jump off a cliff. He tests the method successfully on a small bug by projecting a static lightning from his hands. However, when he jumps out and tries to hit the Road Runner with it, the bird is holding a mirror that causes the lightning to be reflected back to Wile, who, in only managing to hypnotise himself, obligingly walks off the cliff.

8. The Road Runner taunts his opponent from above, and the coyote attempts to use a seesaw and rock contraption, but the rock simply falls directly back on its owner.

9. Now, Wile sets a gun trap for the Road Runner, with himself ready to activate the guns at a moment's notice. He hides behind a turn as the Road Runner runs into the trap. However, because of the force he applied to the strings, the guns are pulled into the crosshairs of the coyote when they are activated, and he shoots himself.

10. The coyote now hides behind a rock as he waits for the Road Runner to speed across a treacherous suspension bridge. As the Road Runner crosses, Wile jumps out and cuts the ropes, but instead of causing the bridge to fall, the whole plateau that Wile inhabits falls down. The Road Runner brakes at the end of the bridge and continues his rampage.

11. Wile E. waits for the Road Runner to pass and then loads himself into a "human cannonball" cannon, which unfortunately recoils and is thrown backwards, leaving the coyote blackened.

12. The coyote is now on top of a rectangular board bridging a deep canyon with a large wrecking ball at his command. He drops the ball into a circular path, which would have hit the Road Runner if the bird hadn't stopped and waited. The ball continues its circle and ends up right back where it started - on top of the coyote.

13. One last time, the coyote attempts to ensnare his nemesis. He mines a canyon with myriad explosives behind a doorway with many "FREE BIRD SEED" declarations and connects the main controller to the door. Unfortunately, as soon as the coyote climbs over the wall, he encounters a gigantic truck. With no recourse, Wile opens the door and is blown up repeatedly, then run over by the truck. Wile sticks out his tongue and beeps in an imitation of the Road Runner, and then falls unconscious. 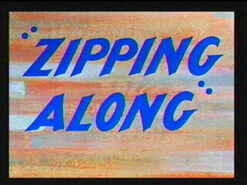 Title Card before remastering
Add a photo to this gallery

Retrieved from "https://looneytunes.fandom.com/wiki/Zipping_Along?oldid=202629"
Community content is available under CC-BY-SA unless otherwise noted.